On demand more keys can be added, f.i. a double Bb key or anything else, as well as a C-foot for the low C. For this C-foot there are several different options available. Please contact me for more information. 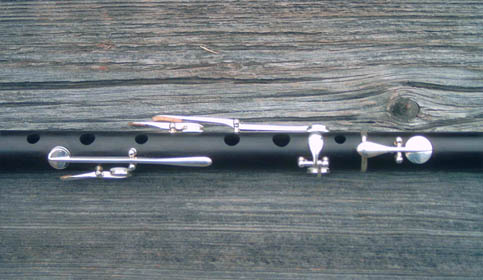 There are two main systems to attach the key to the body of the flute. In what is called block-mounted, the mount is part of the wood of the flute. With the pin-mounted system, small metal pins are screwed into the body of the flute and these are used to mount the key. From a purely mechanical point of view the friction of a pin-mounted system is less than for a block-mounted instrument, giving the pin-mounted in my opinion a slight technical advantage. For the keywork on Pratten type flutes, where not only the finger holes but also the keyed semi-tone holes are large in diameter, I prefer to use pin-mounted keys. If nothing is further specified, a Pratten type flute will be supplied with this type of keys. For the Rudall&Rose and the Standard type with up to 6 keys, I normally supply block mounted keys in order to respect the aesthetic line of these instruments. Pin-mounted is also possible. If you consider adding a C-foot, it is cheaper to consider the pin mounted option, but better contact me for more information. 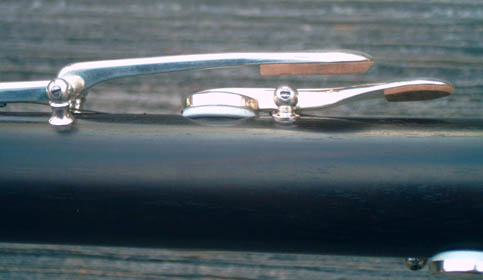 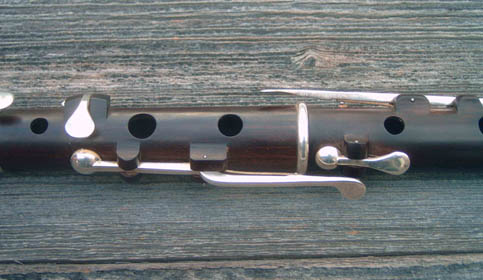 Most people who intend to order a flute wonder whether they should go for a keyed instrument. Keys have certain obvious advantages. The semitones that these keys allow you to play without difficulty have (about) the same colour as the other tones, whereas a semitone that is taken through fork-fingering is always a bit muffled. Keys also allow some notes to be vented more. For example, opening the D# key helps the E to sound brighter. The main disadvantage of keys is that they are expensive and that the pads can leak if they are not maintained properly.

The usefulness of keys to play traditional Irish music is limited: about 95% of the tunes in the traditional repertoire can be played without any keys. If, however, you also intend to play other music on the instrument, such as Bulgarian/ Macedonian music, classical music, or indeed any pieces that are written in more complex keys, a keyed instrument is indispensable.

The choice for keys

You still don’t know? I then recommend that you take a keyless flute. If you want to change it for a keyed instrument later (up to 1 year), I will take back the unkeyed body (if it is in good condition and only for non-smokers) and you only have to pay the price difference between what you paid for the unkeyed model and the price of the keyed model of your choice. 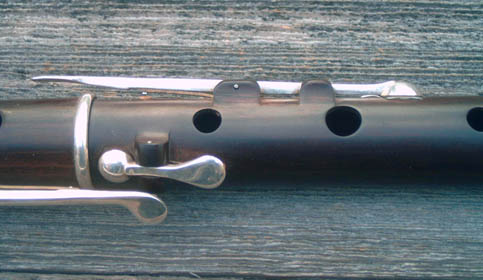 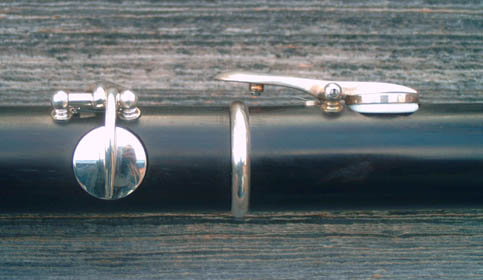