I mainly make three types of D-flutes: a Rudall & Rose type, a Pratten type and my own Standard design lying somewhere in between the two previous types.

The Standard model D-flute is a flute that combines properties of the Pratten model and the Rudall & Rose model. It not only allows you to produce a very powerful sound, it also enables the more experienced musician to explore the tonal subtleties that are so typical for flute music. The overall sound is sweet with a powerful bottom D, and an effortless second octave. It is very responsive and easy to play, making it an instrument that is interesting for beginners as well as for advanced players.

The Standard flute in the basic model is available with up to 6 keys (D#, F short, F long, G#, Bb, C). It comes with block-mounted keys, unless pin-mounted keys have been asked for. 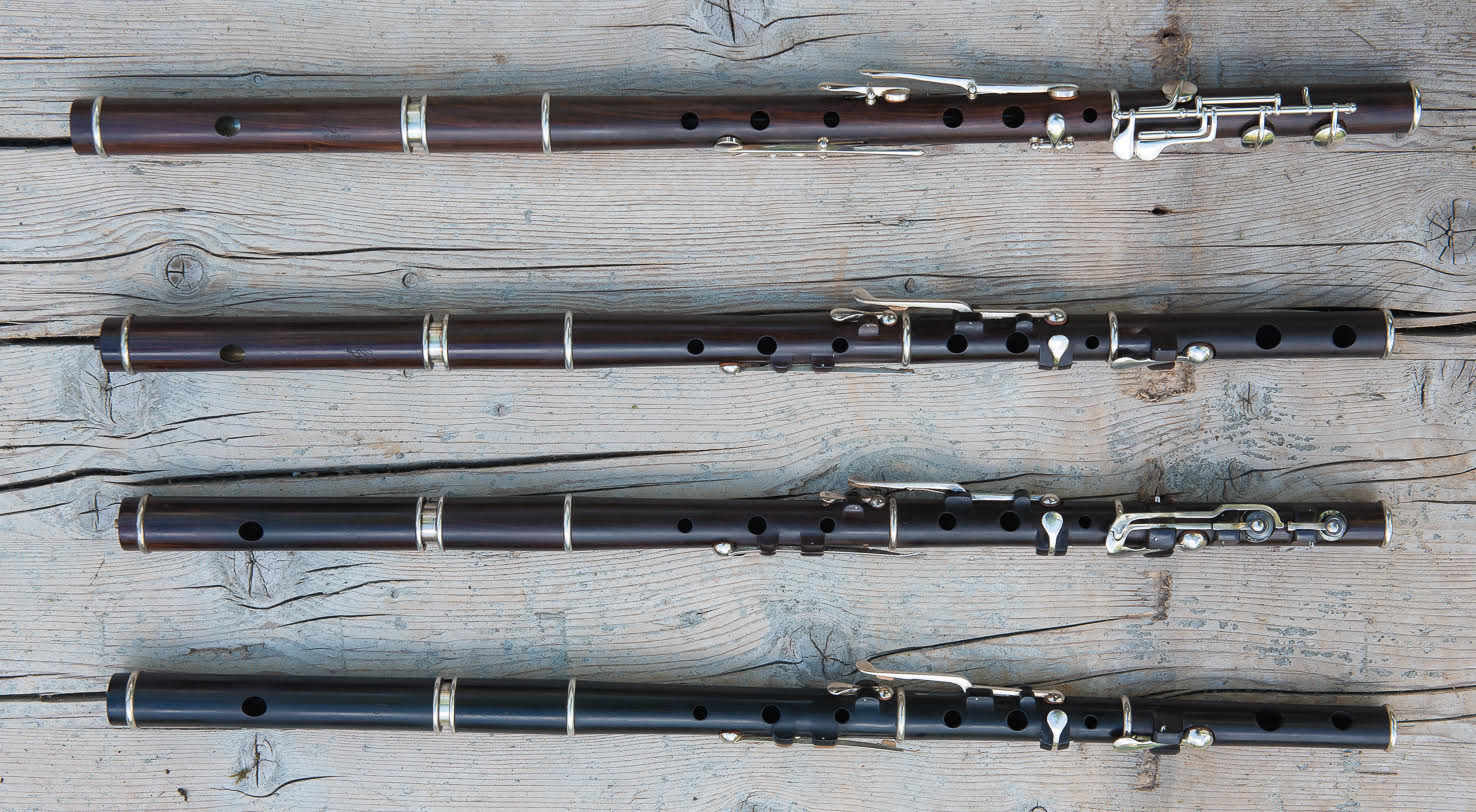 The Rudall & Rose model is based on about 10 different Rudall & Rose and Rudall & Carte flutes I’ve measured. The instrument has a very sweet, yet powerful tone, and is brilliant in its second octave, but it requires a bit more technique than a Standard model flute to make it sound well. The size of the finger holes of different original Rudall&Roses can vary greatly, so, next to Rudall&Rose models with average sized holes, I offer a model with small finger holes. This can be interesting especially for people with small hands.

The ″Superior Model″ is made from a limited amount of old Cocus wood (at least 50 years old, probably older) that I was able to obtain from a descendant of the French Lot family. The Cocus wood makes the instrument look very much like the original Rudall & Rose flutes and the “Superior model” has the head joint lined with full sterling silver. The tone holes are undercut and the head joint is provided with a screw cap to adjust the cork position.

The Rudall & Rose model is available with up to 6 keys. It comes with block-mounted keys unless you specify otherwise. The ″Superior Model″ can have up to 8 keys and comes only as a 6 or 8 key instrument.

The Pratten model has the typical large bore and large holes that are to be found on the original Prattens and it produces the most powerful sound of the three different models. This power is an advantage if you play unplugged with other (louder) instruments or if, for example, you intend to go and play mainly in sessions in noisy pubs. However, this volume has to be paid for: you need more air and a good embouchure to ‘fill’ the instrument.

The instrument is available without keys or with up to 8 keys. The keys are pin-mounted, the C-foot joint is a Boehm system foot joint.

Flutes in other pitches

This flute has a large diameter head joint and a quite conical bore, giving it a deep sound and a good bottom Bb. The finger stretch is average, and can be made even smaller if requested, but this weakens the C and F a bit.

My C-flute design is not just an extended D-flute. It has a different bore and the finger holes are rather large. The sound is dark and powerful, and already surprisingly different from a D flute. The C flute is an attractive option if you are going to play together with instruments in C of in F. This flute sounds great when playing music in C or F and it allows you to avoid the struggle with keys on your D flute. The flute can be provided with up to 6 keys.

Listen to a flute in C, played by Michel Sikiotakis

My Eb flute basically has a Pratten-type design, making it sound really powerful. If you wish to impress with a brilliant tone and incredibly fast response you can use the trick that is found on a lot of CDs, i.e. take a keyed Eb flute instead of a D flute. Eb flutes are available with all the keys and other options that are available for the D-flute.

Listen to a flute in Eb, played by Isaac Alderson

Third flutes in F and G

The “Third flute” plays a third higher than a flute in the standard pitch of D. My Third flutes are based on a Rudall & Rose Third flute in the key of F#. I adapted this design to make it play in the contemporary keys of F and G. For more details, please contact me.

I make little flutes in A, Bb, C, D, Eb up to high G (a pen-size instrument). These instruments normally come without tuning slide, but can be made with a tuning slide as well. D-piccolos/fifes can be made to resemble local historical instruments, like Suisse Romande models. 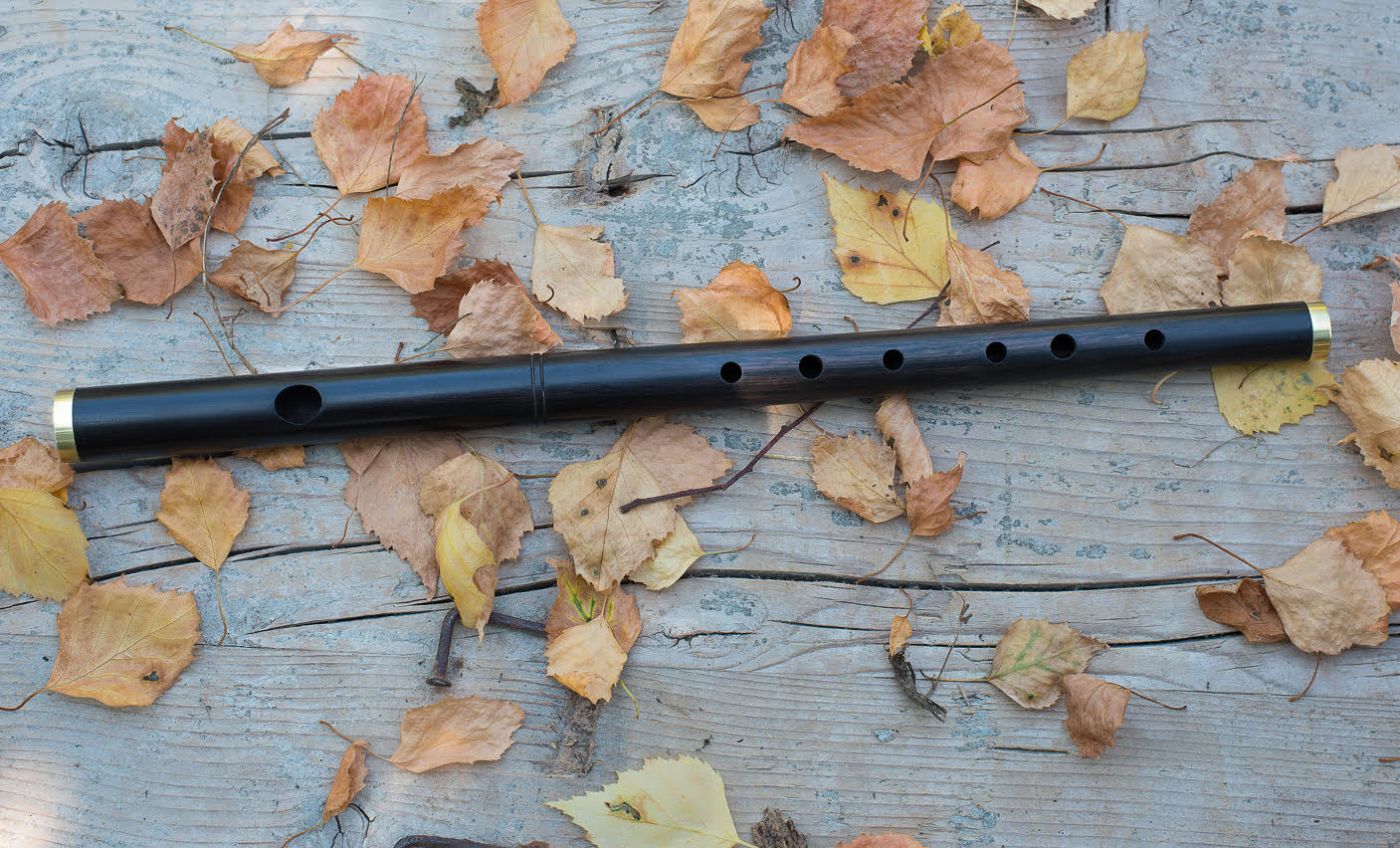